No building stands in isolation. Engaging environmental and cultural networks, architecture is an inherently grounded art. As such, limits, constraints, and restrictions drive the design process forward, engendering solutions which celebrate the world as we find it. Embodying this dynamic, renovations and adaptive reuse projects embrace challenging problems and existing conditions. This is especially true when working with industrial buildings, places where machinery, manufacturing, and power combine. 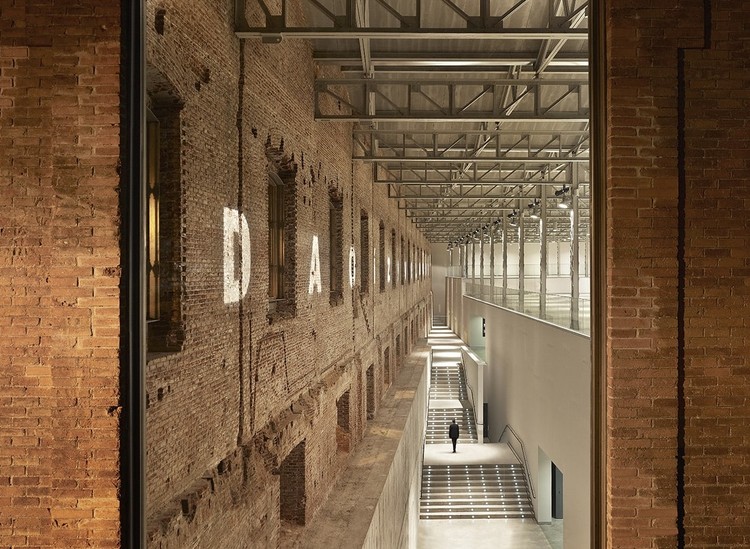 There are innumerable scales and formal approaches to industrial architecture. From breweries and sawmills to warehouses and refineries, each building is created around specialized processes. Often preserving original building shells and structure, renovations usually introduce new programs within defined boundaries. Whether public or private endeavors, these transformations happen at varied speeds. While some projects can be slow and ad-hoc in nature, renovations usually signal larger forthcoming developments within a neighborhood or district.

Exploring industrial renovations worldwide, each of the following designs were made with careful insertions and creative spatial arrangements. Respecting historic techniques and building methods, the new renovations combine a place-based logic with contemporary concepts.

The chosen site to accommodate the new offices of Vieira de Almeida Associados law firm is located in the center of Lisbon, in a former industrial area near Tejo riverside. The project develops through two old industrial buildings: the main one faces Dom Luís I street and Boqueirão do Duro and contains the larger facilities; the smaller one is turned to Conde Barão Square and holds part of the back-office services.

Kraanspoor is a light-weight transparent office building of three floors built on top of a concrete craneway on the grounds of the former NDSM (Nederlandsche Dok en Scheepsbouw Maatschappij) shipyard, a relic of Amsterdam’s shipping industry. This industrial monument, built in 1952, has a length of 270 meters. The new construction on top is the same 270 meters long, with a width of 13,8 meters, accentuating the length of Kraanspoor and the phenomenal expansive view of the river IJ.

ocated in the “Ile de Nantes” a site undergoing industrial transformation, the Alstom Warehouses requalification project marks a new step towards the objective of urban rehabilitation. It goes beyond – it is about city-making, city-making together on the old Alstom warehouses site so that a new dynamic arises at the crossroads of culture, technology, and economy. In over 20 years, the available space of the existing warehouses will be restructured and converted into a multipurpose Creation district.

The renewal of all industrial plots is accompanied by the dual renewal of industry and space. However, the content organization under the industrial orientation is often dynamic and unfixed, so the spatial form needs to continuously reflect the value of the potential content. The goal of renovation and design of “Shouxing Innovation Workshop” is to build the communication spaces and venues which is adapted to potential domain functions by reorganizing the site and content, interface, and texture of the building.

This project aims to transform an old railway warehouse into a cultural facility within the new Valencia’s Central Park which nowadays covers the old railway tracks of the main city station. The shed was built in 1917 by Demetrio Ribes and it is a valuable example within the railway architecture of Valencia. The design allows maximum flexibility of use so different activities can happen simultaneously while respecting the industrial character of the building. The shed is divided into five bays which geometrically guide the project.

The Carreau du Temple, a historic steel and glass market from 1868 located in the Marais district of Paris, was reopened by the mayor of Paris on 20 February 2014. This building, with its characteristically transparent architecture, is one of the few surviving structures from the nineteenth-century tradition of metal framed architecture in Paris. It was listed on France’s heritage list in 1982, five years after the demolition of the Paris Halles and its famous Baltard pavilions. In its design, studioMilou architecture sought to ‘idealize’ this listed monument by emphasizing the refinement of its structure and making it as transparent as possible.

Long-time resident of King’s Cross, Heatherwick Studio has reinvented two heritage rail buildings from the 1850s as a new shopping district with close to 60 units, fully opening up the site to the public for the first time. In 2014, the studio was commissioned by King’s Cross Central Limited Partnership to radically rethink the site. The pair of elongated Victorian coal drops was built to receive coal from Northern England for distribution around London by barge and cart.

As part of the Daoiz y Verlarde complex of former barracks the objective is to preserve the architecture; a representative sample of Madrid’s industrial and military heritage. From the start, the idea was to respect the basic geometry of the existing building, as well as its saw-tooth metal structure and the brick-built façade. The interior space has been emptied to create a container for the Cultural Centre, which is divided into two areas with separate entry points and circulation areas, but with a strong visual and spatial connection between them, and the possibility of their adaptation to different types of events.