UNHCR, the UN Refugee Agency, estimates that global forced displacement surpassed 80 million in 2020, which is more than one percent of humanity. Five countries account for 67 percent of people displaced across borders: Syria, Venezuela, Afghanistan, South Sudan, and Myanmar. Reasons can vary from war conflicts to economic, political, or environmental conflicts and crises.

Although it is a global phenomenon based on geopolitical, legal, and social dimensions, there is also a subjective dimension to this type of displacement, mainly because people use the symbolic systems surrounding them to build their identities. In other words, besides facing the hardships of leaving their homeland, refugees must also deal with the subjective effects aggravated by the condition of being a “foreigner,” which means that they become marginalized by the established system of symbolic-cultural representations. 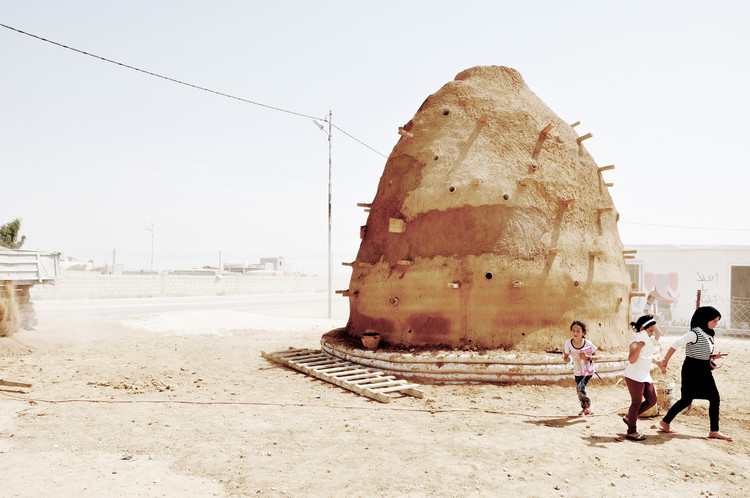 This migration process – displacement, arrival, and adaptation – leads to many social, political, cultural, and psychological challenges and is marked by grief and many losses, starting with the language, followed by cultural, behavioral, religious, and environmental changes, which culminate in a conflict with one’s personal identity. According to Professor Lucienne Martins-Borges, due to the sudden and unintentional nature of displacement, refugees carry very little of what used to characterize their identity, which can lead to a harmonic cultural patchwork or identity schizophrenia.

Approaching this subjective dimension is crucial to understanding how to build refugee camps and shelters. It must be a place that provides not only physical support but also inspires safety and hope. So what is the role of architecture? What should a shelter look like?

According to UNHCR, its main goal is to find “measures to ensure that refugees’ basic human rights are respected and that they are allowed to live in dignified and safe conditions that will help them find a long-term solution.” In this sense, settlements today are what Bauman characterizes as a continuous state of temporality or a “permanent state of transition.” This architecture is an emergency solution, used exclusively during the period of territorial rehabilitation.

In his book, Arquitectura de Emergencia (Emergency Architecture), Ian Davis states that this type of architecture is a transition, temporary rather than final, not intended to last for a long time, that is, shelters must be treated as a process rather than an end.

The Refugee Housing Unit (RHU), or the Better Shelter, developed in partnership with the IKEA Foundation, is one of the most frequently used models in refugee settlements today. Its structure consists of a steel frame with lightweight insulated polypropylene panels that can be assembled in less than four hours. The shelter’s modular design allows for altering and adaptation to include, for example, a solar panel on the roof that provides electric light or mobile phone charging via a USB port. The shelter’s expected lifespan is three years, and while still relatively simple, RHUs represent a huge improvement compared to the traditional tents, offering more protection, especially for women, who face the risk of sexual harassment.

Despite the great advantages of this system, it has been criticized for not meeting the requirements of climatic conditions in different locations. However, the RHU can be altered, so it is up to the local authorities to determine if any modification is needed, like in the State of Roraima, Brazil, for example. ACNUR, UNHCR’s local agency, replaced the windows with bigger ones using locally produced materials. The purpose was to increase cross-ventilation because of the high temperatures throughout the year, as stated by architect Juliana Coelho in this interview with ArchDaily.

Japanese architect Shigeru Ban has also developed temporary housing prototypes used in refugee camps such as the Kalobeyei settlement in Kenya. According to the architect, “the shelter designs have to comply with the national regulations for housing while responding responsibly to local climatic conditions and challenges, providing replicable sustainable solutions to shelter.” Ban uses this approach to construct shelters using materials that are locally available and eco-friendly, including unconventional materials like cardboard and paper tubes, as in UNHCR’s Byumba Refugee Camp, Rwanda.

Besides these somewhat more tangible solutions, however, many unconventional and conceptual initiatives also contribute to the refugee crisis. Among them is Abeer Seikaly’s design entitled Weaving A Home, a collapsible structural fabric shelter that can adapt to various climates while also providing the comforts of contemporary life such as heat, running water, and electricity. It is composed of high-strength plastic tubing molded into sine-wave curves and woven into a stretchable fabric membrane. According to Seikaly, “in this space, the refugees find a place to pause from their turbulent worlds, a place to weave the tapestry of their new lives.”

Therefore, the shelter is where refugees start to experience individuality after arriving in the host country, which is why, besides all the technical and environmental challenges, it also needs to act as a type of home that is not so stable, representing a duality between something permanent and something temporary. There is a fine line between assisting in the victims’ recovery from physical and psychological trauma and providing a home without creating situations that can transform environments that were meant to be temporary into permanent settings.

Apart from these personal aspects, building social relationships within the community is also extremely important. A new sense of community is based on shared experiences, strengthening individuality through conviviality. Therefore, communal spaces are very important in refugee camps and settlements. The Emergency Architecture & Human Rights has addressed this issue by building classrooms for Syrian refugee children. The classrooms were built with the superadobe technique, a traditional earth architecture from Mali, and vernacular beehive house structures of Syria originating from Aleppo and Homs, where many of the refugees come from. Due to the limited choice of building methods and materials, and the harsh environment characterized by hot summers and cold winters, the beehive style is a viable solution for the construction of a school. This kind of building technique does not require high-tensile-strength reinforcements and can be built quickly with unskilled labor, performing better than tents, cement blocks, and corrugated metal sheets in terms of thermal insulation while the costs for construction were halved.

In response to the maxim that within humanitarian responses, programmatically, children often become invisible, the architects of CatalyticAction have designed and built a playground for Syrian refugee children. This project seeks to challenge this notion and expand the remit of what is deemed necessary in emergency situations. We believe that children have a right to an education, to feel safe, to play, and to develop confidence in themselves. The playground has been designed with the input of the children themselves; having completed exercises that allow them to express their own ideas. The design process was just as important as the actual built environment. The involvement of the children from the inception of the project until the actual building gives them a sense of ownership and attachment to the playground, a space of security in this vulnerable environment.

This same group of architects also designed the Jarahieh Refugee School in Lebanon, home to 500,000 displaced Syrian children. Unusual building strategies were implemented, for example, experimenting with locally sourced sheep’s wool as insulation and sound dampening material. As 72% of all the sheep in Lebanon are found in Bekaa, this strategy was not only sustainable but also supported local farmers and laborers hired to clean and dry the wool. The construction process alone was already instrumental in building bridges between the refugees and the local community.

Jarahieh School is also not just a school for children; after 4 pm it is a school for adults, and on weekends it functions as a public cinema and a site for aid distribution. The square formed between the six small buildings creates a public area for all residents of the refugee camp, and during a potential natural disaster such as a flood or snowstorm, the buildings will double as a community shelter. Moreover, once it is no longer needed, the structure can be disassembled and assembled in another location, a characteristic that is very common in this type of temporary architecture.

Speaking of community spaces, Maidan Tent is a great example. It is a proposed social hub to be erected at a refugee camp in Ritsona, Greece, a communal area to counteract the psychological trauma induced by war, persecution, and forced migration. According to the architects, Maidan Tent covers an area of 200 square meters with an aluminum structure covered by a very resistant textile, offering a sheltered, safe environment for up to 100 people, with standardized components allowing for easy installation and maintenance.

One of the most interesting examples of refugee settlements, in terms of the individual modules and the interaction between them, is the Emergency Shelter for Migrants and Travelers in France. The shelter is designed for 400 people (350 refugees and 50 Romani people), and families are hosted for 6 months maximum. The architecture is a response to an important question already mentioned at the beginning of the text: how to offer dignity and functional qualities to a vulnerable population, with different cultures? As a result, the project is designed like a little tow, based on the common notion of “living,” regardless of geographic origin. Between public areas and the most intimate space, everyone easily accommodates within this community. From the Greek Agora to the Church square, people have always been organizing their life around this permanent transition from public to private spaces, from sociability to introversion. The construction lasted only 4 months and the structure was designed to be reused and given a second life somewhere else since the emergency shelter is planned to stay on this site for only 5 years.

Nevertheless, the refugee crisis is an issue that still deserves a lot of attention, not only regarding the architectural aspect of the settlements, as explored in this article, but also regarding urban planning and its relation with the city. These projects are very complex and must address not only the physical environment but also the subjective reality of their users.

This article is part of the ArchDaily Topic: Migration. Every month we explore a topic in-depth through articles, interviews, news, and projects. Learn more about our monthly topics. As always, at ArchDaily we welcome the contributions of our readers; if you want to submit an article or project, contact us.